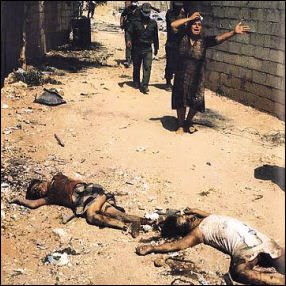 Sabra and Shatilla are two Palestinian refugee camps in Beirut, Lebanon where over two thousand Palestinians were massacred during three days in September 1982 by hundreds of Lebanese Phalange and Haddad militiamen with the aid and support of the Israeli Defense Forces.

During the 1982 Israeli invasion into Lebanon and siege of Beirut, U.S. Envoy Phillip Habib managed to have a written agreement whereby Palestinian fighters would leave Lebanon, providing a U.S. guarantee to the safety of Palestinian refugees left behind in the camps.

After Palestinian fighters evacuated Lebanon, the Israeli army sealed off Sabra and Shatilla refugee camps and established a command post at the Kuwaiti embassy, a seven-story building over looking both camps.

Present at the command post were the primary architects of the atrocity: Israeli Defense Minister Ariel Sharon and Chief of Lebanese Forces Intelligence Elie Hobeika, along with high-ranking Israeli army officials.

In the early morning of September 16th, the Israeli army allowed bloodthirsty armed militiamen to enter the camps, provided with weapons, bulldozers, and communication equipment. They were also given hashish and heroin to help them maintain “courage.” For 48 hours, the militia participated in wholesale slaughter and rape. Women and children were not spared. The Israeli army lit the skies over the camps by firing flares during the nights, and also prevented residents of the camp from escaping . A group of refugees who reached the one of the Israeli checkpoints were ordered by soldiers to return back into the camp – even though they told soldiers that people are being slaughtered inside. This encounter was documented by a Scandinavian news crew.

Ellen Siegel was an American nurse from Baltimore who volunteered at Gaza hospital in Sabra camp. She was rounded up with 20 other foreign medical personal. Upon hearing the radio communications that the butchers inside the camp were ready to execute all of them, an army officer stopped the order and ran back to the camp to rescue Miss Siegel and another female nurse from Holland. The rest were lined up against the wall and executed. Miss Siegel was among 3 Americans who testified in the Kahane Commission, the Israeli official inquiry into the massacre.

No adjectives exist to describe this heinous atrocity. This crime was beyond all human and moral comprehension. However, an American journalist and researcher, Janet Stevens was among the first people to visit both camps the day after this ugly crime. She wrote the following testimony to her American friend Franklin Lamb:

“I saw dead women in their houses with their skirts up to their waists and their legs spread apart; dozens of young men shot after being lined up against an alley wall; children with their throats slit, a pregnant woman with her stomach chopped open, her eyes still wide open, her blackened face silently screaming in horror; countless babies and toddlers who had been stabbed or ripped apart and who had been thrown into garbage piles.”

As the news and images of the massacre were broadcast worldwide, shockwaves, anger, and resentment were felt everywhere. I do remember exactly having the same feeling during the 9/11 terrorist attacks. In fact there were a lot similarities: The number of casualties almost the same, in both cases the victims were innocent civilians, and the perpetrators of both crimes were ruthless and did not value human life.

In Israel , 400,000 protesters took part in a peace rally in Tel Aviv demanding the resignation of Ariel Sharon and demanded he should be tried for war crimes.

An Israeli commentator denounced Sharon ’s complicity into the massacre in a commentary which said in part, “…you can’t toss a snake into a cradle, then act surprise when the baby gets bitten.”

Meanwhile the Kahane Commission in Israel turned out to be a “kangaroo court” where the outcome was essentially predetermined, and the process was compromised. Several high-ranking military officers were found negligent, got a slap on the hand and later promoted. Sharon was forced to resign as the defense minister, and was barred for life from holding public office. Despite all of this, Israelis elected him in 2001 as their prime minister. In 2005, President Bush called this certified war criminal as “a man of peace”. “The butcher of Beirut” would have been more accurate title to describe Ariel Sharon.

Eluding Justice: What happened to the victims and those responsible for the massacre 25 years later is mind-boggling.

* On June 18, 2001, several victims and other relatives sued Ariel Sharon for war crimes in a Belgium Court. But under pressure from U.S. and Israeli governments, Belgium dropped the case as inadmissible. According to Franklin Lamb, Belgium scrapped the case after US Secretary of Defense then, Donald Rumsfeld, told Belgium: “It is your goddamned Sharon Trail or NATO Headquarter, you choose!”

* All militiamen who took part in the killing received amnesty from the Lebanese government.

* Elie Hobeika was killed in a car bomb in Beirut 20 years after the massacre. His killing took place days after he gave an interview threatening to turn more damning evidence against Ariel Sharon in the Belgium Court.

Finally, remember the 3 Americans who testified in the Kahane Commission?

Janet Stevens was killed during the 1983 bombing of the US Embassy in Beirut. She was pregnant with her first child, a baby boy. Mrs. Stevens went into the Embassy to seek more aid for the Lebanese people in the south and Palestinians in Beirut who were affected by the Israeli invasion and by the massacre. Mrs. Stevens’ best friend, Franklin Lamb is a prominent researcher and author, frequently writing about the Middle East. Their work and sacrifices for human rights represent America ’s pretty face.

Ellen Siegel continues to write letters, make calls, and write op ed. pieces to bring justice for the victims of the Sabra and Shatilla massacres and to promote genuine peace between Palestinians and Israelis. I had the privilege of meeting her in 1985 in a Washington, D.C. hotel lobby.. She has returned to Lebanon several times. She is currently in Lebanon for the 26th anniversary of the massacre to stand in solidarity with the Palestinians. To honor the and pay tribute the victims and their loved ones, she will be placing roses on the soil of the mass grave of the victims, and intend to silently recite Kaddish, the Hebrew prayer for the dead.