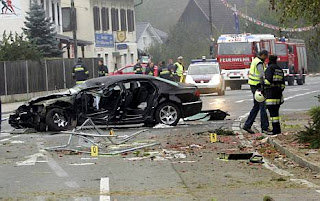 When I first heard the news that popular Austrian politician Jörg Haider was killed in a car accident on October 11, 2008 in Köttmannsdorf, Austria after the flurry of controversy regarding his right-wing political view including favoring Hitler's economic (labor) policy and extolling the reunion of Waffen-SS veterans among other controversies, I knew something was fishy.
Here's the actual quote from Washington Jewish Week, October 9, 1997:
"Israel need not apologize for the assassination or destruction of those who seek to destroy it. The first order of business for any country is the protection of its people."
Here is the list of relevant articles that mention Israel's "deep concern" about Jörg Haider's popularity in the native country Austria.

Jerusalem Post, September 27, 2008: The end of Austrian-Israeli relations?
U.K.'s The Independent, September 26, 2008: Haider is back. Just don't mention the war

Unsurprisingly, militant Zionist organization Anti-Defamation League condemns Mr. Haider in the 2004 article "Joerg Haider: The Rise of an Austrian Extreme Rightist".
Like JFK and Benazir Bhutto [1], Jörg is summarily executed for pissing off Israeli Zionists for the myriad of reasons, such as the "problematic" circumstance of political relations.
Also included is the information on the make and model of the car that Jörg drove prior to his untimely and unbelievably bizarre death. What are the odds a politician or promising candidate would be killed in an accident, vehicle or plane crash? (JFK Jr, Paul Wellstone, etc.)
It's improbable for Jörg Haider to have been killed in what would seem like a minor automobile accident with the type of a customized vehicle he drives.
The death of Jörg Haider-- to deprive Austria of its "natural destiny" by the intervention of the intelligence thugs on behalf of the foreign power -- is most certainly a successful assassination operation by Mossad agents.
Any politician who rises to challenge Israel and its skewed history & Zionistic heritage and whose popularity and controversy is evident is automatically placed on the Zionists' death list.
Tragic as it may seem about the fate of the politicians who end up being murdered for daring to challenge Zionist power elite with "politically incorrect views", one thing is certain: the Zionist regime of Israel will perish when the time is right.