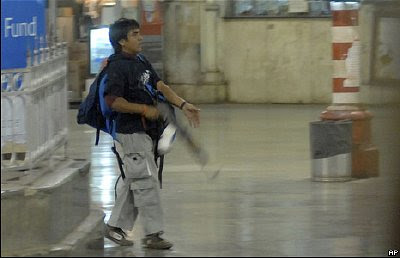 A Pakistani TV station has claimed "Hindu Zionists" and the Mossad carried out the Mumbai terrorist attacks, which it said were a "botched" imitation of the 9/11 attacks on the United States.

The terrorists looked like Hindus and "no Pakistani speaks the language they chatted in," said security expert Zaid Hamid on the television's "I Differ" news channel show.

Hamid said that it was a "badly planned" operation that had gone horribly wrong. "The Americans executed the 9/11 attack perfectly. They managed the media very well. The Indians tried to repeat the formula but goofed up. The idiots made a complete mess of it," he argued.

He maintained that that the attackers wore saffron Hindu Zionist bands around their wrists and that during the first five minutes of the attack, three Indian counterterrorist officers were killed by authorities in order to halt their investigations of a terror network within India's security agencies. Another reason to end the probe, he said, was to divert attention to terrorism originating in Pakistan.

Pakistani leaders have rejected criticism for the Mumbai attacks, and President Asif Ali Zardari said his country is not to blame. He also said that the attack may be a tactic to divert attention from the ongoing war between Pakistan and terrorists.

Interior Ministry advisor Rehman Malik stated, "The Mumbai attacks were designed to force Pakistan to deploy its troops on the country’s eastern borders, thereby clearing the western borders for infiltration” into Afghanistan.

The Pakistan Daily Times editorialized that despite the confession of the single terrorist who was not killed by Indian commandos, "'confessions'" [are] no more credible than 'confessions' in such situations."
Posted by cahyono adi at 21:31