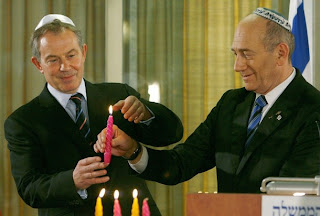 Former British Prime Minister Tony Blair will be one of the three laureates of the Dan David Prize for 2009, awarded annually by Tel Aviv University.

Each of the laureates will receive a $1 million prize, 10 percent of which is contributed to 20 doctoral and post-doctoral scholarships.

Blair was selected to receive the prize in leadership for what the judges described as "his exceptional leadership and steadfast determination in helping to engineer agreements and forge lasting solutions to areas in conflict."

Also receiving the prize for 2009 are Paolo de Bernardis, Andre Lange and Paul Richards, in the field of "Astrophysics - History of the Universe," for "their discoveries concerning the geometry and composition of our universe."

In the field of "Global Public Health," the prize is awarded to Robert Gallo, "for his research of the HIV and T-cell leukemia viruses and especially for the development of a robust, simple blood test to detect the HIV virus."

The three prizes are divided into past, present and future - with the prize in astrophysics going to the first category, Blair's leadership prize in the "present" category, and the prize in public health falling into the "future."

Ben David, a businessman and philanthropist said, "The 2009 laureates epitomize the essence of the three time dimensions; we have three scientists who shed light on the way in which our universe was formed, a great leader instrumental in resolving ongoing world conflicts, and a scientist working to alleviate human disease and suffering now and in the future."